Cloned from http://www.velovision.com/ftp-admin/VVArchive/www.velovisionmag.co.uk/showStoryeb48.html?storynum=37 as the future of Velovision is in doubt.

Brox, the load-carrying quad bike manufacturer, has sold 50 of its machines to logistics giant DHL. They'll be put into service in London - and other cities may follow.

Five pre-production Baby Broxes (or 'Compacts' as they are officially known), and some original Broxes, have been working in the City of London for some months. (The link takes you to a page on the Bikefix website - where there's lots of Brox info. Brox don't appear to have their own site, but you can email Rob Brock.)

According to Rob Brock of Brox, the deal was put together by Jim Geeling of E-mission Control, who ran a small fleet of Original BROXes for DHL under contract for six months before joining the DHL team as a consultant and introducing the Baby BROX to them. E-mission Control operated the Red Star HPV operation (before Lynx absorbed it) and also did HPV contract work for FedEx before finally teaming up with DHL. 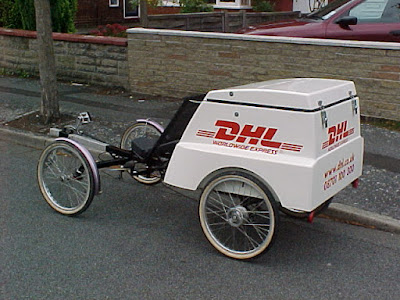 As far as Rob is aware, the 50 are for London initially, but there are also feasibility studies underway for other large cities in Europe and one in the USA - probably New York. DHL have had a special 'Hi Cube' box designed, 20% bigger than the one pictured. They have ordered 50 vehicles to be delivered over a 12 months period starting the end of this month. The only other modification they have requested is that they are having disc brakes on the front, rather than hydraulic drums, and bigger Nokian tires as fitted on the original Brox.

Rob Brock is bullish about the prospects, and is looking forward to starting their first series production run: "Although we have approx a dozen Baby BROXes out there at present, the vehicle is still really only at a pre-production stage. The feedback from these initial customers will be incorporated where possible into the first production models - the DHL ones will be a large percentage of the first production run. The only reason that we are happy to go into series production at this early point is because the learning curve on the Baby should be considerably less than the Original BROX as we using existing technology such as the BROX torsional articulation and gauge of tubing etc - combined with tried and tested components from the AnthroTech trike. For instance, the kingpin layout and sliding bottom bracket system are basically AnthroTech designs beefed up for our use. I approached AnthroTech for permission to incorporate these parts because there is no point in re-inventing something that works right. They were kind enough to allow me to use them. That's the spirit of HPVers."
at 19:18